The next two posts are things that happened a couple weeks ago. But I wanted to talk about them because they are worth it. Hope you all don't mind. Thanks! 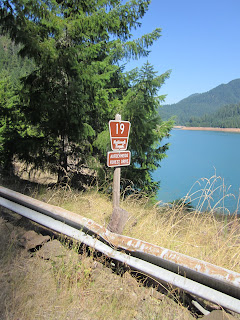 So my lovely wife and I had the opportunity to join two other couples and do a two day grand cycling adventure riding the Aufderheide Scenic Byway. It was awesome!

Not only was the road wonderfully maintained (The north side especially.) but the scenery was some of the best I've ever ridden through.  Beautiful rivers, lakes, mountains, and forests. And far and away the BEST downhill section of road I've ever ridden.

the ride started in the bussling metropolis that is Rainbow (Just short of Mckenzie Bridge on highway 126.) and headed south to Oakridge. We ditched two vehicles and used Cynde and Mike's rig as the SAG wagon for our excursion.

Cynde had all the logistics figured out before we got there. And quite frankly I think if she ever had the desire to she could be a guide professionally. Almost (I'll get to that later.) everything ran off like clock work. From the times people needed to switch driving duties. To lunch breaks and accommodations as well. It was really nice to just have to hop on our bikes and ride without having to worry about any of that other stuff. Thanks Cynde and Mike for inviting us and taking care of all the "fun" part.

As we headed south we almost immediately begin climbing. This would be a reoccurring theme both days. The grade of the road was never bad (With one notable exception). And I 'm sure someone who considered themselves a climber would have no problem knocking the first portion of the ride out in 2-2 1/2 hours. But we had all set in our minds that this was going to be a social ride and no prolonged hammering allowed. And there generally were always changes in gradient keeping us (Especially myself.) from busting a lung for to long. 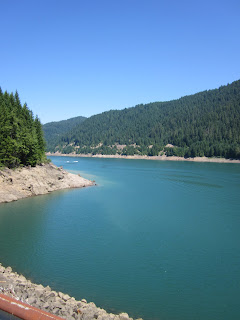 Within about a half hour we were rounding Cougar Reservoir. What a lovely lake. I've only seen that kind of blue, almost turquoise in large lakes in Canada. Unfortunately my lack of photography skills and the bright sun don't do it the proper justice. But just trust me when I say it was gorgeous. 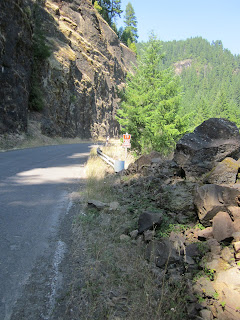 And by this time I started to realize the truly amazing thing about this road. At least from the cycling perspective. It wasn't the nice road conditions, which they were. It wasn't the beautiful scenery, which there was plenty of. And it wasn't the really nice weather (77 degrees and once the temps started to rise we were in the shade.). Or even the mountains and forests... 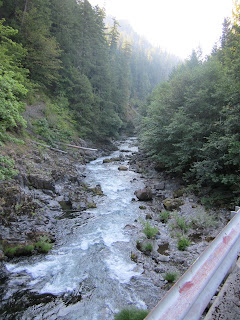 There were almost NO vehicles on this road. I mean we got passed by 12 cars/trucks and except for one large biker gang (Who were really nice and gave us a wide birth.) maybe 20 motorcycles the whole day. In 64 miles of great road. I don't think I've ever seen that.  I guess just being out of the way and having no real destination on either end or in the middle just keeps this little jewel a secret.  All I know is that I hope it stays that way. So don't tell anyone okay?

As we passed the lake we got one of the few slight downhill sections this direction for a mile or so and then proceeded to ever so gradually climb our way up the mountain through Box Canyon.


﻿﻿﻿ ﻿﻿﻿
The highest elevation of this route isn't killer. Just shy of  3500 feet. But it will take you legs out a bit as you get closer to the top. The gradient keeps ratcheting up and up and up. Until you get close to the top where the grade peaks out at the 10-11% mark. On the north side of the hill there are some changes in grade which helps but are still pretty tough.

I was running a 53-39 up front and a 28-11 cassette that I borrowed from Brison (Thanks B!). And I'm sure some guys would have no problem what so ever rocking that. But a big guy like me I was under geared in a few places. My cadence was down in the 50-60 rpm range in the really steep parts. I'm sure I looked like a monkey fucking a coconut. But what can I do? I am who I am. 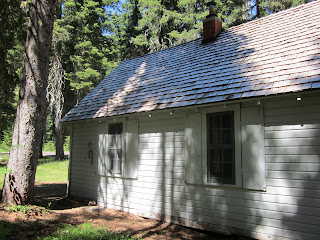 Once we were to the top we stopped and had lunch (both days) at a small cabin that had a picnic table. This place also had one of the cleanest out houses I've ever seen. It smelled like cedar. Now that's luxury...

After we crested the peak we had a screaming descent for about 2 miles (11% grade). It's the kind of descent that has a very high pucker factor. Couple that with dappled sun light on the road surface and I was cautious the whole way down that section. Once we were past that part it's more of a gradual downhill (2-4% grade) with rollers tossed in there just to keep us honest.


﻿ ﻿ Now this whole time people in the group had been trading turns driving the car and waiting at designated mileages for drivers to switch and for riders to get food, water, etc. So it was my turn to take a turn behind the wheel. It was a 14 mile section and driving the speed limit I figured I would have enough time to pop down to the river for a dip since it was so hot outside. And since it was a few hundred yards from where I parked to the river I figured I would just tootle my bike down there. So I head down and and thoroughly enjoying myself. I take a couple of artsy pictures. Such as this.... 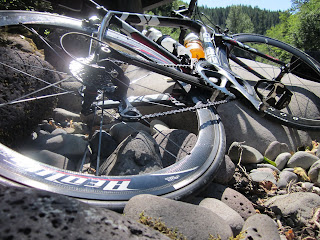 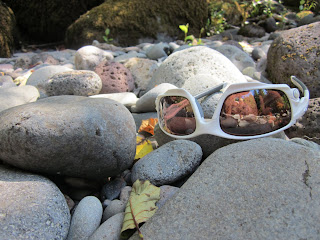 Take a soak in the river. All the while making sure that I was keeping an eye on my watch.

Once I figured they would be getting close I grabbed my stuff and started to roll up to the where I parked the van.

Only there was no van...

I was freaking out! I had the key in my pocket and who the fuck would steal a locked up van in the middle of no where!?

So as my brain was racing with all the potential scenarios I was hoping that my group had just grabbed the van and continued on their way. But my helmet was in the car. And I never ride without one.

I must admit on a side note that it felt really weird to ride down the road without my helmet. It's like I was running with my dick out or something (Okay maybe not that weird. But close...)

All this time I kept stopping anyone that was either on the side of the road or the couple of vehicles that were rolling up the opposite direction and asking if they had seen a white mini van? And all of them said no. Which made me freak even more.

So I would tell them that if they saw anymore cyclists up the canyon to tell them that I would meet them at the next check point.  And this went on for another 14 miles. All the time I was hoping that I was making the right decision.

With about 2 miles to the next check point Hollie and Cynde come rolling back up the canyon in the van. I was so thankful that they were the ones that had taken the van. And Cynde laughed about my key explanation because I guess she has a ton of extras so she wouldn't ever lock herself out.

I'll tell you what though, it took me a couple of hours to clam down about the whole thing. But eventually I was good and we finished up the route. 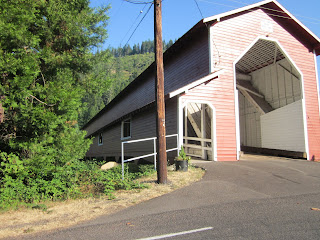 We staid at a really quaint hotel that was run by Dan and Elizabeth (What a couple of characters.) It was small but clean and very nice.

That night we went out for Chinese food and beer. It was lovely.

The following day we did the route back over to our cars. Which was much the same. Only in reverse this time. Well, minus my losing the car and all.

The two highlights going the other way are. That 10-11% grade that I mentioned going down before is a hell of a lot harder going up. I was griding something fierce on that part.  And the descent just on the other side is the most wonderfully swoopy, smooth downhills EVER! Just heaven. I don't think I could have had anymore fun with my pants on. Just awesome. 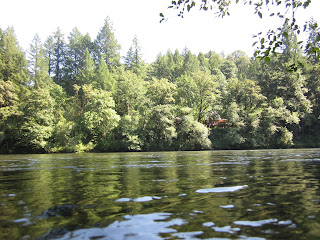 Once we got back to the cars and thanked Cynde, Mike and Co. for the lovely trip well headed back down towards Eugene. But we stopped to dip our tired legs into the Mckenzie for a little "cold water immersion therapy". It was wonderful as well. And the view was spectacular... 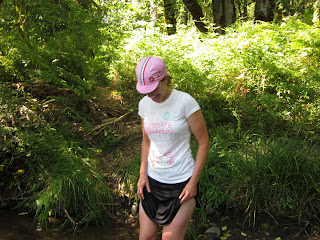